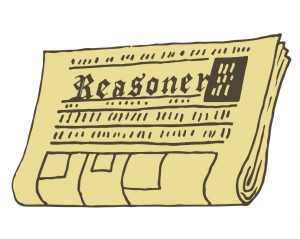 On this site in 1842, George Jacob Holyoake became the last man to be arrested for blasphemy in England. Holyoake was a famous social reformer and radical thinker who promoted secularism.

Many towns had a Mechanics’ Institute, a place where working men could go to study or hear lectures.  Cheltenham’s Institute on Albion Street was the venue of an event which turned out to be of great social importance when, in 1842, a young Birmingham man, George Jacob Holyoake, went there to give a lecture on the social philosophy (‘socialism’) of Robert Owen.  Robert Owen was a campaigner for fairness and good working conditions for working people at a time when life for them was at its worst.

During his lecture on the evening of 24th May 1842, someone asked Holyoake what he thought about our duty to God.

The twenty-five-year-old Holyoake said working families were too poor ‘to have a god.’  ‘Put the deity on ‘half pay’ he suggested, to save the poor from paying so much out of so little in church tithes.

This unintentionally made his audience laugh which was considered blasphemous.  Cheltenham’s magistrates sought Holyoake’s arrest.  Holyoake, determined to exercise his right to hold and express a reasonable opinion, spoke again at the Mechanics’ Institute a week later, on the subject of Free-Discussion.  And it was here that he was arrested.

Later in life, Holyoake coined the term ‘secularism’ which he promoted as a morality separate from religious morality.  He founded the Secularist Society, championed the cooperative movement, and became a leading figure within the freethinking movement.  He died in Brighton in 1906.

(The full story of Holyoake’s year of 1842 is told in Catherine Howe’s Holyoake’s Journey of 1842, Brewin Books)

Astonishingly, much of what Holyoake stood for back then still needs people to stand up and shout about today…

Thankfully our commitment to free speech and free thought these days is sufficiently strong enough that there’s no chance of anyone being arrested for saying anything deemed offensive to god or to organised religion. That’s certainly progress.

But, even with over half the country saying they have no faith, it’s astonishing how questions of morals and ethics are still thought of as the domain of the religious, and in particular religious leaders. When do we ever really acknowledge that each of us lives our life the best we can and most often guided by our own moral compass rather than religious teachings or dogma?

That’s something humanists want more of us to think about, and to reflect on what influences our sense of ‘right’ and ‘wrong’ – and how, in general, we’re capable of living well and ethically by drawing upon human experience and reflecting on the influence of our actions on others. We want everyone to develop and use critical thinking skills to make better, and better-informed decisions, about how to lead their lives.

In a sense, Holyoake’s definition of secularism as ‘morality separate from religious morality’ goes a good way to defining humanism, though now we’d certainly add something about looking to science and evidence to understand the natural world…

And the very word ‘secularism’ is now used in a variety of different ways, but often to refer to the separation of religious faith and practice from public policy. ;Many religious people would therefore consider themselves  ‘secularists’, wanting faith to remain in the private domain.

Humanists emphasise living a good life in the one life we know we’ve got. We also campaign against religious privilege, for example:

We’ve a lot of thank Holyoake for still. He was ahead of his time.

If you think his values ring true for you, why not do this quick quiz to see ‘how humanist are you’?

Or get in touch with your local humanist group: www.facebook.com/gloshums