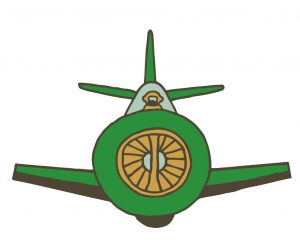 Britain’s first successful jet aircraft ‘Pioneer’ was assembled on this site in 1941. The aircraft was designed and built by the Gloster Aircraft Company at Hucclecote.

The completion of the first British jet aircraft on the site now occupied by Regent Arcade is a significant local achievement to be celebrated.

Two E28/39 aircraft were designed and built by the Gloster Aircraft Company at Hucclecote, but after a bombing raid on the factory work was dispersed to Regent Motors and Crabtree’s Garage in Cheltenham for completion.

Regent Motors’ large premises were demolished when the Regent Arcade was built. The old BhS store at the back of the arcade was approximately on the actual site. The brass commemorative model of the E28 which used to stand in the arcade was donated to Jet Age Museum between Cheltenham and Gloucester, where it is on permanent display. The former Crabtree’s Garage was in Carlton Street.

The photo taken from the roof of the Plough Hotel on the High Street circa 1960 shows the Regent Motors yard more or less on the line of the arcade, with workshops at the far end and the back of the Everyman Theatre on the right.

The first E28/39’s unofficial first flight was at Gloster’s Brockworth airfield on 8th April 1941, when it left the ground three times during taxying trials. The official first flight was at RAF Cranwell on 15th May. Gloster’s chief test pilot, Jerry Sayer, was at the controls on both occasions. The original aircraft now hangs in the Science Museum in London and Jet Age Museum displays a full-size replica.

The historical Victorian influence of Bristol and Swindon with Brunel and the Great Western Railways with its drive with all things iron and steel has provided a regional influence here in Gloucestershire.

Aviation roots have their place here in Cheltenham with companies playing their part in a global industry. There is a rich history of design and manufacture going back to the 1900’s.  Gloster Aircraft Company manufactured the Gloster Gladiator and over 2700 the famous Hawker Hurricanes, They manufactured the Meteor and Javilin. The work of  Sir Frank Whittle and his jet engine required an fuselage and this was constructed in secrecy at the Regent Motors garage in Cheltenham now the shopping Arcade, the E28/39 first flew in May 1941.  Names like Dowty Aviation (1935) manufacturing propellers, Messier-Dowty originally a joint venture company, now SAFRAN, manufacturing landing gear for major Civil and military aircraft, Smiths Aircraft Instruments now GE, manufactured instruments and autopilots for many aircraft including Concorde, Douglas Equipment supplying aircraft tugs and tractors seen at most international airports. Interestingly, here at Staverton we have a jet engine test facility (GJTC) that goes back quite a few years and still today tests jet engines. Not a lot of people know that.

Small sheds and entrepreneurship go hand in hand. The seed of a bright idea often ferments in a shed. People work on prototypes in sheds, be it in the back of a garden or more of an industrial shed. Thinking of aviation, consider the Wright Brothers, who invented and built the world’s first successful airplane, built it in a bike shed!

In my view a shed is the heart of Britain in the way the industrial revolution happened, the humble blacksmith and his shed forged new ideas.

There are over a thousand Mens Shed groups in Australia and here in the UK there are over 450. It’s a growing organisation where the health & wellbeing of men and women (36% of members are female) in retirement is very important.

The idea for Men in Sheds was cooked up in a shed in Australia. Men were at a loss for what to do in retirement. These groups can be a sanctuary for these men, bringing people together and tackling loneliness and isolation.

Men in Sheds, reaches out to the community too. We respond to local need and have done a number of major projects in this area.