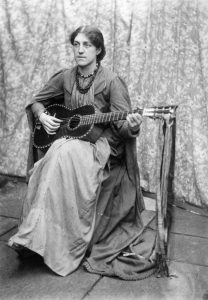 Mary ‘May’ Morris was an important figure in the Arts and Crafts Movement as an embroidery and jewellery designer and maker.  Born in 1862, she was the younger daughter of William Morris, and her accomplishments have tended to be obscured by her father’s fame, and her devotion to him and his memory.

Morris seems to have encouraged an interest in craft in both his daughters.  By the time they were seven and eight they were learning embroidery from their mother Janey and her sister Bessie, and May remembers exciting visits to her father’s workshops, especially enjoying the stained glass and the ‘mystery of the Kiln House.’

May was expected to do something with her life, and may have seen herself as her father’s heir.  She was a talented artist, and could have gone to study art at the Slade, but she decided to follow in her father’s footsteps and chose craft.  She trained at the South Kensington School of Design, and in 1885, aged 23, she took over the embroidery section of Morris & Co. from her father.  She had already designed some embroideries for the firm, and from that point all new designs were done by her and Morris’s assistant, John Henry Dearle.  Dearle eventually became  the Art Director of the firm.  May ran the embroidery section until her father’s death in 1896, although she continued in an advisory role after that date.

Although she designed many of the smaller items: firescreens, cushion covers and tablecloths she probably didn’t embroider them herself.  She was a highly skilled embroiderer and worked on the larger commissions for the firm such as portières, wall hangings and altar cloths.  She seems to have been a kind employer.  When she set up her own house at 8 Hammersmith Terrace, the workers came and worked in her drawing room, with a visitation from Morris every morning.  On race day, May would invite all her workers to her garden for a party, and gave annual presents.

Like her father, she was heavily involved in the Socialist League, taking part in meetings and demonstrations.  It was through the League that she met the man that she would fall disastrously in love with, the playwright George Bernard Shaw.  The affair came to a sad end, and May married another man, Henry Halliday Sparling, another Socialist friend.  The marriage didn’t last, and May remained alone for the rest of her life.

Throughout the 1890s and 1900s May was heavily involved in the Arts and Crafts scene in London.  She designed jewellery; she wrote a play, White Lies, in 1903; she wrote articles and a book on embroidery: Decorative Needlework, published in 1893.  She taught, and was then in demand on the lecture circuit – in 1910 travelling on a tour of America.  She was an advisor and teacher at the Central School of Arts & Crafts and at Birmingham, where friends and old employees also taught.  She was a regular exhibitor at the Arts and Crafts Exhibition Society, and in 1907 she was a co-founder of the Women’s Guild of Arts.

The latter part of her life was dedicated to her father’s memory. She spent years editing his collected works, a mammoth twenty four volume collection for which she wrote the introduction.  She spent her time between her house in London and Kelmscott Manor in Oxfordshire.  She put a lot of time and effort towards the end of her life in improving the village of Kelmscott, with through free soup, the WI, workers cottages and upkeep, and culminating in the building of a village hall, designed by Ernest Gimson.  She died in 1933, a well-loved member of the village.  Only now, though, is her artistic legacy being re-examined.

This photograph shows Jane Morris, May's mother, in dignified old age with her two daughters. May's older sister, Jenny, had been a very bright, scholarly child, but when she was a teenager she developed epilepsy. In the 19th century the illness was treated with drugs that tended to dull the mind of the patient. Jenny spent most of her life as an invalid. It was on May that the hopes of the family fell.

The Manor House, Kelmscott, from the Farm by E H New, around 1895-1900. Woodcut. William Morris and Dante Gabriel Rossetti jointly leased Kelmscott Manor, near Lechlade as a rural retreat in 1871. The house was bought by Jane Morris after her husband died, and stayed in the family until their daughter May's death in 1938.